The amazing benefits of mycelium in a single source 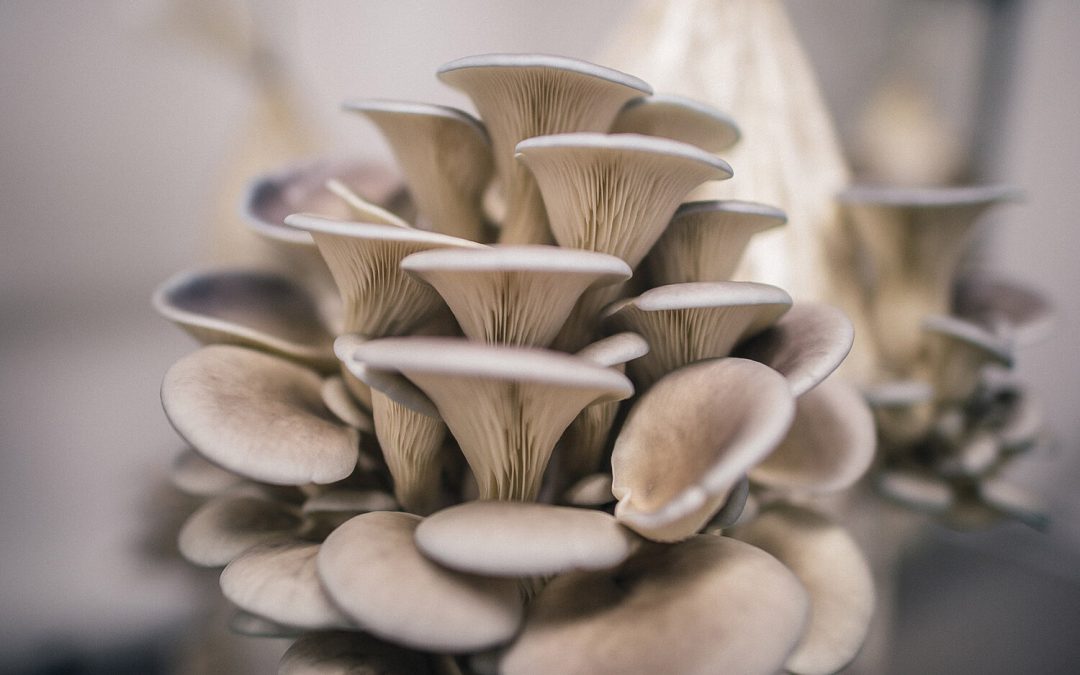 Combining naturally harvested mycelium with organic yerba mate and organic wheatgrass, MycoTea is a light, refreshing beverage loaded with antioxidants and health benefits. Offering a smooth and vibrant flavor, MycoTea is the only source in the world offering the benefits of living mycelium backed by science. It is a truly unique beverage alive with energy. 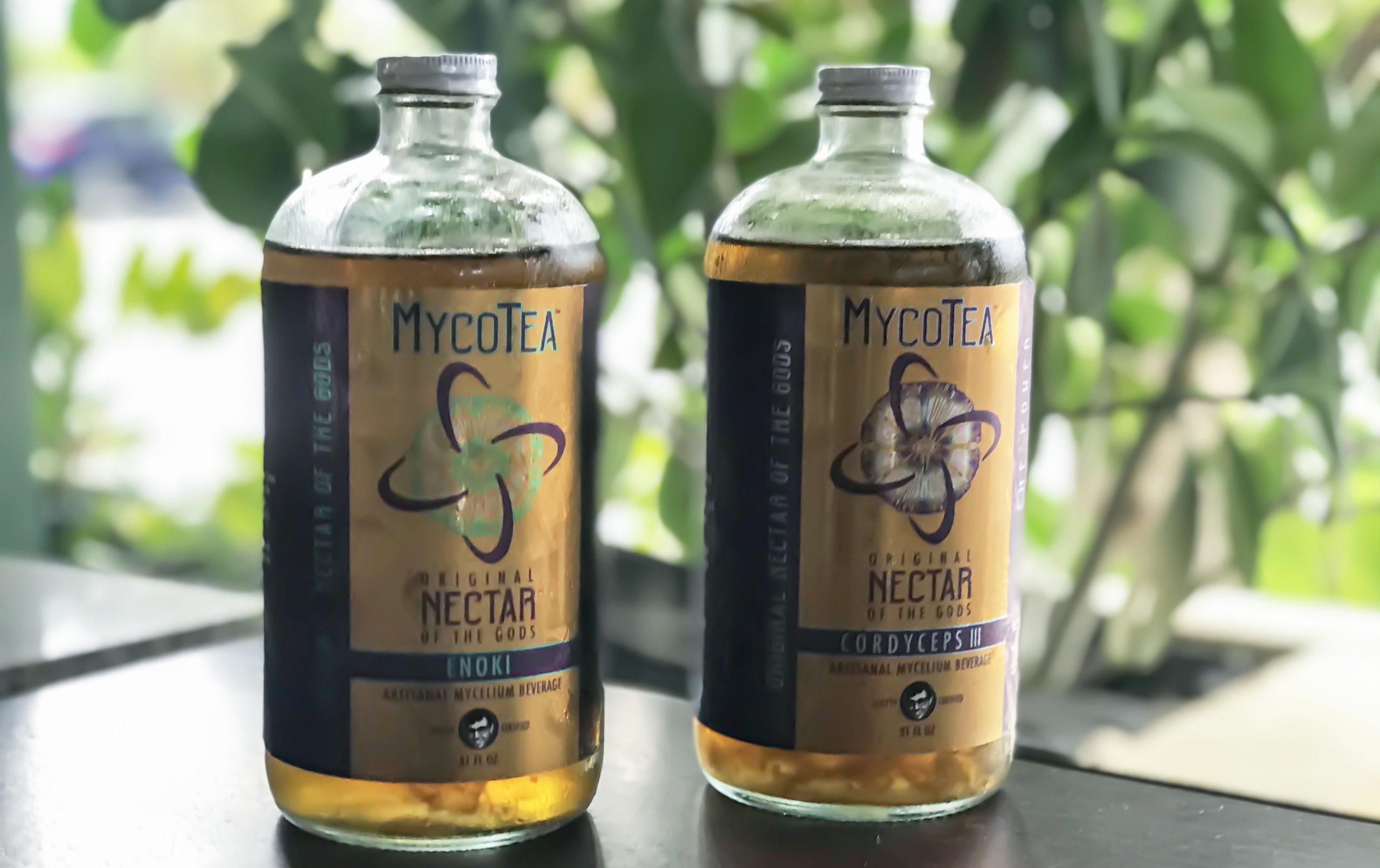 MycoTea is the world’s first organically sourced living mycelium beverage, offering the power of 12 of the most scientifically researched mushrooms, revered for thousands of years for their medicinal, energizing and healing values.  Mycelium is the nutritional essence of the mushroom and has been used for millennia as a holistic solution to many ailments. Scientific research indicates benefits for immune system function, internal health, inflammation, brain function, fatigue, libido and much more.

Fruits & Roots offers MycoTea in 31 oz. glass Boston round bottles. We invite you to stop by and pick one up. One small glass a day is all you need. You’ll love the smooth taste and the way it makes your body feel.

Get to know these 12 power-packed mushrooms and their benefits

Power: Cordeyceps sinensis, also known as the caterpillar fungus, lives on the Tibetan Plateau including parts of India and western China, otherwise known as the “Roof of the World”. During the 1993 National Games in Beijing, China where three female runners set 5 world records for the 1500, 3000 and 10,000 meter races. After testing negative for anabolic steroids and other banned substances, it was later revealed by the coach that the runners had taken C. sinensis extracts. Anecdotal evidence of the potential performance enhancing properties of C. sinensis ignited consumer interest. In fact, C. sinensis has long been used in TCM to “invigorate the lung and nourish the kidney” in China for hundreds of years. Demand for the fungi was further accentuated by the numerous scientific reports stating specific pro-health-related claims. C. sinensis tonic can be purchased over the counter and is believed to provide the immune system with a boost especially after serious illness. An ever growing list of symptoms remedied using C. sinensis include respiratory, renal, liver, nervous system, cardiovascular diseases, cancerous tumors, decreased libido and even stress, fatigue and aging. In fact, long before any of these studies had been published, C. sinensis has officially been classified as a drug in the Chinese Pharmacopoeia since 1964.

Strength: Corydyceps militaris is a unique and precious medical fungus in Chinese Cordyceps, which has been widely used as a traditional medicines and biocontrol agent against sickness in China for centuries. Polysaccharides are one of bioactive constituents in Cordyceps militaris with a variety of biological activities, including immunomodulation, antioxidant, anti-tumor, and anti-aging activities, anti-inflammatory and anticancer agent among others. Cordyceps militaris (bei-chong-chaw, northern worm grass) is a precious and edible entomopathogenic fungus, which is widely used in traditional Chinese medicine (TCM) as a general booster for the nervous system, metabolism, and immunity. 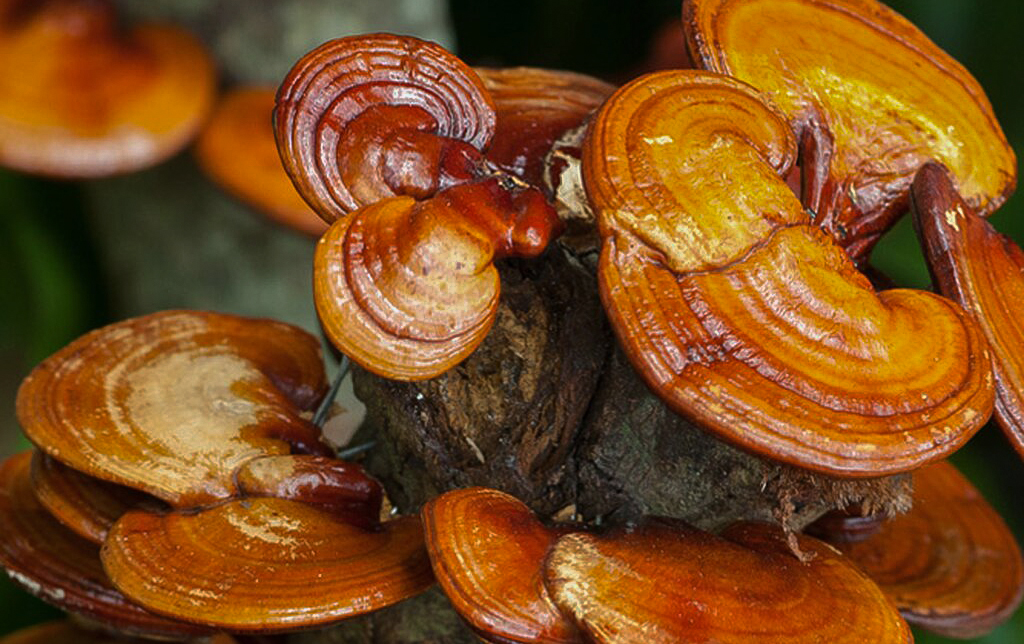 Long Life: Tigris mycelium (lignosis tigris), also known as the tiger milk mushroom, is an important medicinal mushroom in Southeast Asia and has been consumed frequently by the natives as a cure for a variety of illnesses. The history of usage for tiger milk mushroom dated back to almost 400 years ago. Local Malay and Chinese traditional practitioners have used it to treat leukemia, cervical cancer, intestinal ulcer disease, kidney disease, body swelling, fever, asthma, and consumed as general tonic. In Hong Kong and China, the Tiger milk mushroom is a costly traditional medicine utilized for the treatment of gastric ulcers and liver-related diseases, such as hepatitis and cancer.

Vitality:  Coriolus versicolor, also known in the literature by Trametes versicolor or Polyporus versicolor, commonly called Turkey Tail. This mushroom rises from lignocellulosic wastes and has a fan-shaped wavy margin and may exist in nature in several different colors. Both extracellular and intracellular polysaccharides of C. versicolor are physiologically active as bioactive compounds. Two polysaccharides, polysaccharopeptide (PSP) and polysaccharopeptide Krestin (PSK) were isolated from C. versicolor and used as a supplement to support chemotherapy and radiotherapy of cancers due to its immunostimulatory properties. Furthermore, it seems that these polysaccharides may also act as prebiotics by stimulating the growth and/or activity of probiotic bacteria in the colon. Polysaccharides isolated from C. versicolor have demonstrated antitumor activity in the past . In vitro studies showed that PSP acts selectively against certain tumor cells. Thus, it has been reported that C. versicolor extract, at the concentration of 1 mg/mL applied directly in human cancer lines, inhibited their growth namely gastric cancer, lung cancer, leukemia and lymphoma . Moreover, PSP is active against Ehrlich ascites carcinoma, sarcoma 180 and leukemia P388. 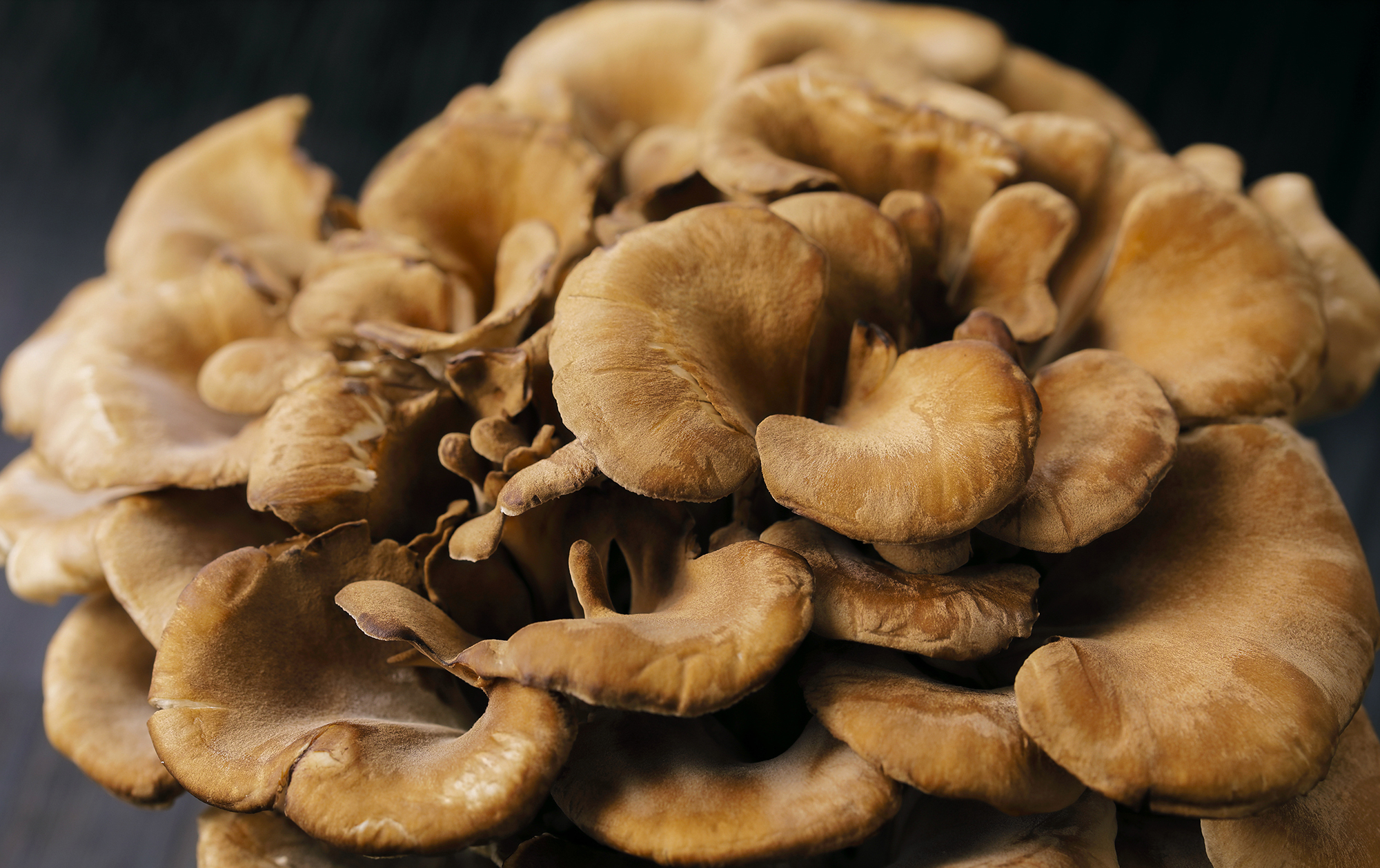 Energy: Maitaki (grifola frondosa) is a widely consumed edible and medicinal fungus. Ancient books record that it can boost qi and fortify the spleen, moisten the lung and protect the liver. Modern people mainly use it to assist in the treatment of diabetes mellitus and various cancers. Over the past three decades, G. frondosa polysaccharides were shown to possess various promising bioactivities, mainly including antitumor and immunomodulation, anti-oxidation, anti-hyperglycemia, and meanwhile can effectively act on the skin and hematopoietic stem cells. Type 2 Diabetes mellitus (T2DM), a disease with impaired glucose, protein and lipid metabolism, low-grade chronic inflammation, and immune dysfunction, is a global public health crisis.

Nurture:  Enoki (flammulina velutipes) is a medicinal fungus belonging to the class Basidiomycetes with a high medicinal therapeutic value. Many studies have demonstrated that flammulina velutipes has various biological activities, including heptatic protection, anti-tumor and immunomodulatory activities. In the present study, one new water-soluble heteropolysaccharide, flammulina velutipes polysaccharide I-A (FVP I-A), was extracted and purified from the medicinal fungus flammulina velutipes using DEAE-cellulose column chromatography and Sephacryl S-300HR column chromatography. The antioxidant activity of FVP I-A was evaluated by examining its ability to scavenge superoxide and hydroxyl radicals and its reducing power. The immunomodulatory activity of FVP I-A was evaluated by measurement of nitric oxide (NO) and cytokines released and secreted by macrophages that were activated by incubation with this polysaccharide as part of the innate immune response, and determination of lymphocyte proliferation as part of the adaptive immune response. This flammulina velutipes polysaccharide may prove useful in oxidation and immune applications.

Protection: Bears head Tooth (hericum americanum) is rich in active, health promoting substances. Tests of substances extracted from this mushroom have been used in the treatment of cancer, hepatic disorders, Alzheimer’s and Parkinson’s diseases, as well as wound healing. There are also indications of improved cognitive abilities and support of the nervous and immune systems. Promising results have been reported in clinical trials and case reports about the improvement in the quality of sleep and alleviation of menopause symptoms. Normal essential metabolic processes or external sources such as exposure to pollution, alcohol, tobacco smoke, heavy metals, pesticides, certain drugs and radiation cause the formation of free radicals in the organisms. Antioxidants inhibit free radical reactions and cellular damage in living organism. Although human body is protected against free radical damage by antioxidant defense and repair systems, the balance between the antioxidant defenses and the production of free radicals may be disrupted. If there is an imbalance between the antioxidant and oxidant in the human body, called oxidative stress, may cause many diseases such as rheumatoid arthritis, arteriosclerosis, cirrhosis and cancer may occur. Hericum americanum has been shown to have high antioxidant components and the ability to reduce oxidative damages from the above influential free radicals that the population is exposed to daily. 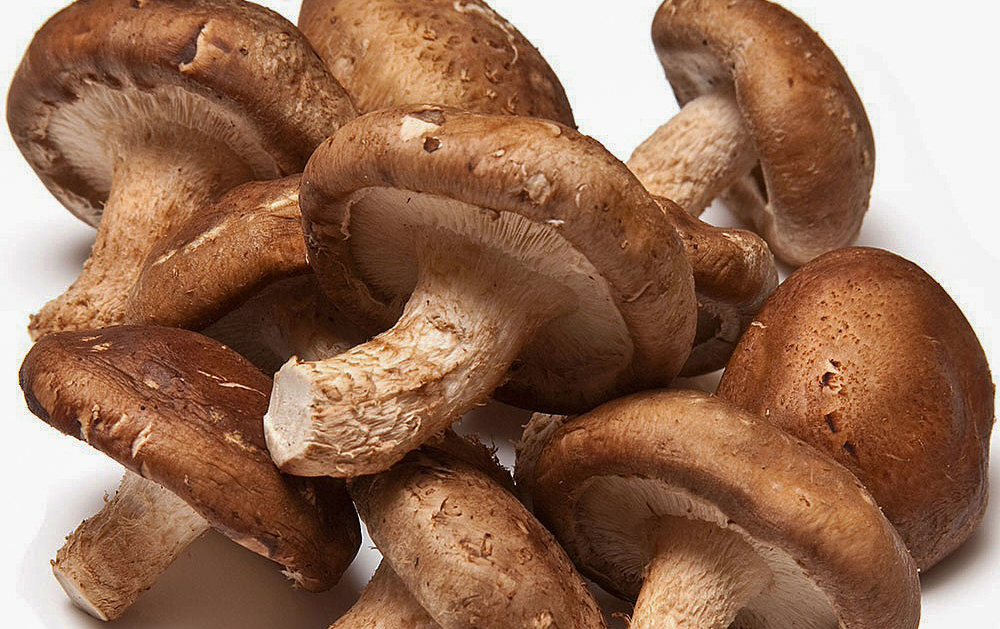 Connection: Shiitake (lentinus edodes) has been consumed for more than 2000 years because of its nutritional value and health benefits. It has a low lipid content, high fiber content, and a considerable amount of proteins; it also contains B vitamins and minerals in addition to a wide range of functional metabolites including polysaccharides, polysaccharopeptides, lectins, and secondary metabolites with bioactivity, e.g., lentinan, a-glucan with immunomodulatory activity, among others. Extracts and pure compounds of shiitake exhibit antibacterial, antifungal, cytostatic, antioxidant, anticancer, and immunomodulatory activity. Some of the compounds shown to be created by Lentinus edodes are truly amazing.  AHCC is an α-glucan-based standardized Lentinula edodes mycelium extract that has been extensively investigated as an immunostimulant both in animals and/or in humans affected by West Nile virus, influenza virus, avian influenza virus, hepatitis C virus, papillomavirus, herpes virus, hepatitis B virus and HIV by promoting a regulated and protective immune response. Although the efficacy of AHCC has not yet been specifically evaluated with respect to SARS-CoV-2 disease, its action in promoting a protective response to a wide range of viral infections, and the current absence of effective vaccines, could support its use in the prevention of diseases provoked by human pathogenic coronavirus, including COVID-19.

These statements have not been evaluated by the FDA. This information is not intended to diagnose, treat, cure or prevent any disease.

“Let Food Be Thy Medicine.”-Hippocrates